2019 has brought a lot of changes, with our young Ross Traill  taking on the role of Head Chef, a role which he relishes. We thought we’d give you a little background into Ross and we would ask him a little bit about himself so you can get acquainted with the man behind the pass.

How long have you been cooking professionally? 22 years

What is your earliest cooking memory? My grandpa was a butcher and when I was little he used to look after me to give my mum a break. We used to make burgers together and we’d write down the first letter of every ingredient to make up our own word and thats what he called it. He never wanted me to be a chef – he’d rather I’d have been a butcher!

Where did you train to cook? With a company called Gardener Merchant, now known as  Sodexo, It was an apprenticeship scheme as I was terrible at going to school.

How would you describe your style of cooking? Honest – using good food I like to use good ingredients and creating honest food without pampering it too much so the dish speaks for itself.

Do you have a signature dish – or a dish you enjoy cooking? Lamb rump – I love lamb rump. The taste is just out of this world!

What would be your ‘last request’ dish? Lamb rump… it really is that good.

Is there another chef you admire? The late (and great) Andrew Fairley. As a chef who’s establishment is the only one in Scotland with 2  Michelin stars – it’s very inspiring. He’s the opposite of Heston Blumental – good food/no fuss. He will always have a big influence on me – he’s taught me so much in terms of my cooking style.

Any advice you would give on someone wanting to become a chef? Be an electrician! But honestly, work hard and be passionate about what you want to – it’s not a career choice which you want to get into if you’re not going to commit.

Where do you see the menu at the Bridge Inn heading? I want us to continue to a good menu balance so we can appeal to as many guests as possible – it’s never easy to appeal to everyone but I think making a balanced menu is the first step. Making sure that we have honest dishes which are good quality – solid dishes which fast become favourites.

What makes Scotland a great place to source ingredients? We’ve got such a great choice and quality – meat is renowned throughout the world – you wont find better elsewhere.

If you could invite 5 famous people, living or dead, to cook for and enjoy a dinner part with who would it be and why? Andrew Fairlie (I like cooking under pressure). Gordon Ramsay – Robert Redford (What a man!) – Clint Eastwood – Jennifer Anniston (or Cindy Crawford if you’re asking 15 year old me!) 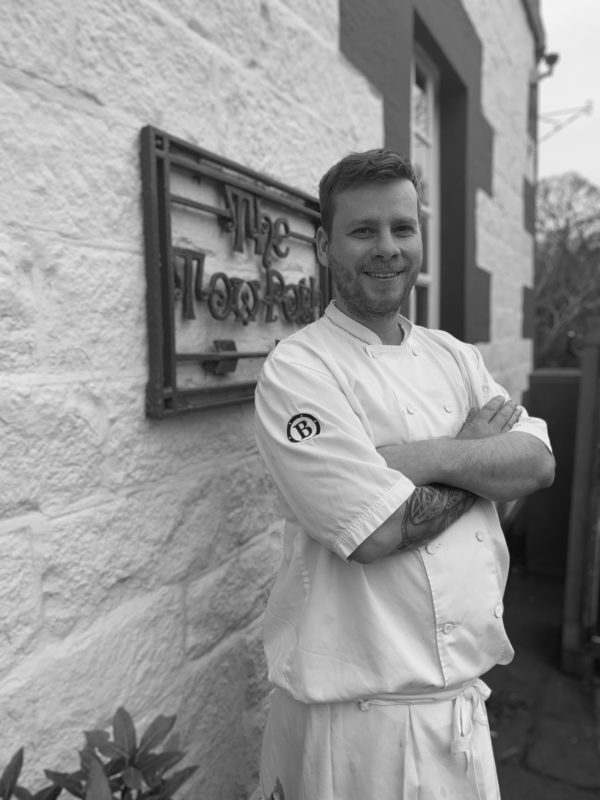